How the American board-shorts culture made Aussie men sexually insecure.

It's trendy to blame America for the world's woes, but in this case, it's true.

Globally, the American (and Australian) board short culture is laughed at. In Europe and Asia, the age-old lycra swimsuit that was common on Australian beaches until the 90s, still rules supreme.

And before you think that it's just a cyclic thing, think again. True, fashion changes then reverts again every 20 years or so, but in the case of men's swimwear and underwear, this has never happened before.

The Speedo was invented in Sydney way back in 1914, whereas the American board short culture only hit our shores a few decades ago.

It isn't though, and nor was the desire to cover up always such an issue in America. Watch an old Beach Boys movie from the 50s. The reason for this change was never about fashion, but a wave of ultra-conservative values that swept through the United States during the late 80s, and those values have impacted hugely on every aspect of life for the modern male.

Once upon a time, we were proud of our masculinity. Now we are not. And it's America's fault.

Watching the decline of male confidence on the big screen.

I remember when the first "Blue Lagoon" movie came out. I was 14. Yes, we were allowed to see male nudity in those days. It wasn't viewed as a bad thing or gay or any other tag the uptight modern guy might want to apply.

In fact, the stars' near nudity was secondary. Blue Lagoon was the first teen love story I'd ever seen - really the first of its kind made for my generation. Not the first ever though.

One only has to look back a few generations earlier than mine to see black-and-whites of a distinctly under-dressed Tarzan or Spartacus. A man's pride in his nudity was nothing new. Only the extinction of that pride is new.

As a teenage boy, I came away from Blue Lagoon thinking how wonderfully romantic it was; that this was how falling in love should be. In a romantic age, it really was a tremendous love story.

I don't recall anyone in Australia being offended by Christopher Atkin's level of undress. Or titillated. After all, we saw flesh on the beach every day. Meanwhile at home, our Dads and brothers walked around the house in their undies, and at school, we stripped off in communal showers and dropped our strides in the classroom while a gruff school nurse cupped our balls to check for hernias. It was normal.

In America though, the first Blue Lagoon created outrage. Religious conservatism was rife. As a result, the Blue Lagoon remake ten years later was embarrassing in its attempt to satisfy the censors. But only for the male actors - Flash as much tit as you like. That much made sense at least. It was Baywatch with coconut palms, after all.

The result of this twenty year fashion faux pas is that in comparison to less uptight nations, American men are totally insecure about sex and nudity, and Australia's once iconic male has become just as wimpy.

In Australia, the once common sight of a guy on the beach wearing Speedos is now a thing of antiquity because of those insecurities. Life was far less stressful for men when we wore Speedos to the beach and jocks instead of boxer shorts.

Why? Because back when we wore 'togs' - That's what they were called btw, not 'budgie smugglers' or any of the other juvenile names given them nowadays by giggling 14 year olds - we were confident of our sexuality and of our right to be men. Our junk was part of our anatomy and no one paid it much attention.

Back then, people who wore shorts to the beach were the weird ones - They were obviously insecure about their manliness and that made them dangerous. Most likely, they were perverts with pockets full of candy. Keep your kids away from that whacko.

And now look where we are - mocking men who are comfortable enough with their masculinity to wear Speedos to the beach, while in reality, those doing the laughing are the ones with psychological problems.

Australian men are not confident about their sexuality any more. We (and I do NOT include myself) have been pussy-whipped into submission, and we've done it willingly. Australian men are wimps. Somewhere along the way, Australia moved away from European culture - and its own - and adopted America's rampant revulson of male anatomy.

The inherent attitude is that a penis is for reproduction only and at all other times, must not be normalised or considered acceptable in any way. It is a vulgar disgusting thing, and the owners of such vile equipment should do all that they can to hide it, and never bring it out except to hit it with a rock.

So now, armed with absurdly sanitised morals that would make the puritans of mediaeval times cringe, half the population is relegated to subscribing to that American culture - where 'naked' means a guy is wearing boxers, and if he is truly naked, he's obviously some kind of pervert. And we here in Australia believe that too. The living proof is board shorts. 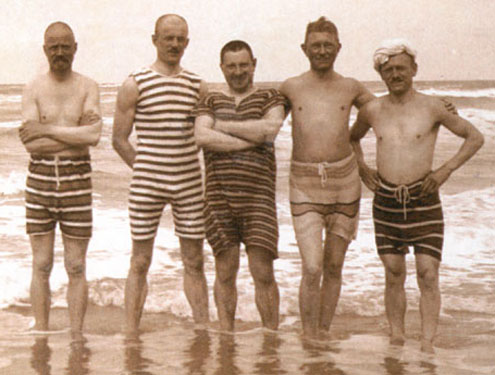 What uptight idiot fashionista conjured the notion that Australian men should where such impractical pants from waist to knee, reminiscent of swimming costumes from Queen Victoria's time, but with a crotch so ludicrously low that the wearer could fit a watermelon down there.

The only thing that board shorts are good for is catching bluebottles, sea-lice, and jellyfish, which in Speedos, would otherwise slip on by.

Nope, net the little buggers and trap them - We're men - We're tough - We want to get stung.  Actually, no we're just twats.

When I hear a guy knock the iconic Speedo that served Australian beachgoers well for 80 years, I cringe with pity.  I know straight away that the concept of wearing such an outfit disgusts this pathetic wimp; that the mental image of himself wearing one makes him nauseous. He is full of self-loathing for his own body.

But that's OK, because all his mates hate their bodies too, so it must be normal. It is normal. We're men, after all. We should hate our bodies. Only chicks should strut around half naked. If we liked our bodies, that would make us gay. Wouldn't it? Hmm, let's not even think about it. Someone please change the subject.

We take it even further though. Not satisfied with our degree of self-hatred, we try to further distance ourselves from our gonads, and pretend that we're children again. This is best achieved by the use of fabrics bearing infantile superhero or cartoon characters.

Forget erectile dysfunction, guys. A grown man in Sponge Bob or Transformer undies is not a good look. And footie boxers? That's an instant sign of a guy who shoots his load quickly.

No gents, you will likely find that garments that mock your manhood could cause vaginal dysfunction instead. Hence your need for meds to cure your sexual woes, that probably wouldn't exist if you reclaimed your masculinity in the first place.

There is no middle ground. Intimacy, romance, true slow lovemaking - These are all things of the past. And this is why so many young people - not just women but gay men as well - are nowadays dating significantly older men.

Older men are more romantic than they're younger peers, they are more indulgent and engaging, and they are demonstrably better lovers.

If pushed for the truth, one would probably find that they're not afraid to wear Speedos either.

I could go on endlessly, but I won't. I just hope that a few guys, regardless of age, read this and go out and buy a pair of real togs and reclaim their masculinity.

You will find additional topics on health, fitness, and beauty in the Human Sciences section.

Have a brilliant day,